The Loop (officially the Chuck Huckelberry Loop) is a wonderful mainly-flat ride along mixed-use asphalt paths around Tucson, with additional spurs heading out to other places. Much of the Rillito and Santa Cruz Rivers have paths on both sides, giving you a choice of which side to ride. Some of the ride is along paths that are well-used by walkers and cyclists, while other parts have a wonderful feeling of remoteness. 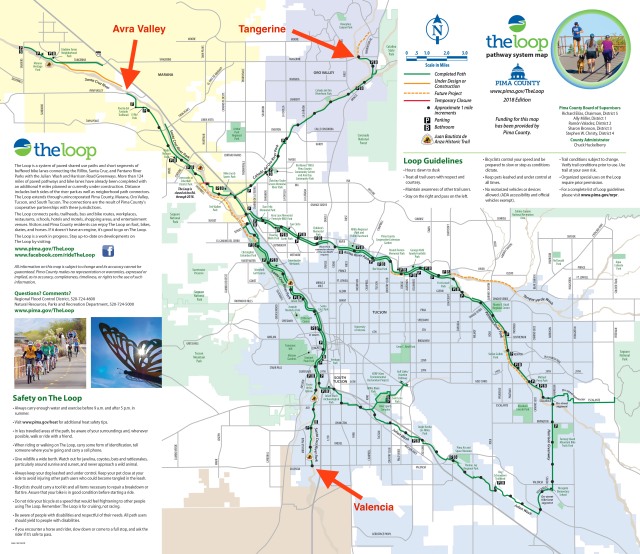 The main web page for the Loop claims (as of March 2020) that the Loop totals about 131 miles but this, somewhat sneakily, includes the paths on both sides of the Rillito and Santa Cruz rivers.

The actual “loop” part of The Loop is about 54 miles, and is a great way to circumnavigate much of Tucson. I’ve ridden it many times, in both directions, and in March, 2020 decided to also ride the three spurs to Tangerine Road, Avra Valley Road, and Valencia Road, which gives a ride of about 105 miles.

The vast majority of the “loop” is on wonderful mixed-use asphalt paths, and there are only a few miles of road (through South Tucson, and along Rita Road). However, at times it can be confusing trying to figure out which way to go, and I highly recommend carrying a map of The Loop (which you can pick up at most bike stores.)

I don’t think The Loop is very well signed, which adds to the difficulty of figuring out which way to go. The first time I rode the “loop” I got lost more than once in South Tucson and had to backtrack, even with a map. Sometimes on the “loop” there is more than one possible way to go, so again, a map is useful.