Sospel is a little town in the Maritime Alps, northeast of Nice, with several great cycling loops that leave from the town. There are several Maginot Line fortifications above Sospel and in the general area which make interesting viewing. The most famous climbs in the area are the Col de la Madone, made famous by Lance Armstrong, and the Col de Turini. 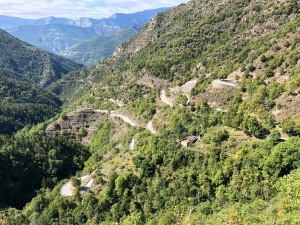 The Col de Turini is the big col in the Sospel area and there are many ways to ride it from Sospel, depending on how far you want to ride and how much climbing you want to do.

The obvious way is to just ride up the D2566 and back but this would be so boring. Much better is to approach it via the Col de Braus, which is what we did. In fact, the climb up the Col de Turini was probably the least interesting part of the ride. Our ride was 99 km (61.5 miles) with 2,662 meters (8,734′) of climbing.

As you can see this ride is a lollipop, and it has some absolutely fantastic scenery, climbing, and descending. It climbs the more interesting side of the Col de Turini from La Bollène-Vésubie, but it’s the smaller roads to get the base of that climb that are the best part.

So, start on the D2204 where the bridge crosses the river in Sospel and head up the D2204. In about 11 km you reach the Col de Braus. A few hundred meters past the col, take the lovely D54 as it heads up right, signed to Turini. At about km 20 you reach a T-junction. Turn right on the D21, again signed to Turini, and climb some of the most amazing switchbacks you’ve seen. They seem to go on forever but unfortunately in about 5 km you reach another T-junction.

Turn left on the  D2566, signed to Lucéram. At km 30, after some great descending, you reach another junction, and you turn right on the D73 and go up then mainly downhill for about 16 kilometers on a beautiful narrow road until you reach an intersection just outside Lantosque. At this point you can turn right on the M2565, or if you want food or drink, cross the bridge and turn right up into Lantosque. Both ways are similar length.

You are now retracing your outward ride and the first thing is the descent of the incredible switchbacks you rode up. After 5 kilometers of pure descending joy, turn left on the D54 and ride this and the D2204 back to the Col de Braus, from where a wonderful fast descent with plenty of switchbacks leads you back into Sospel. 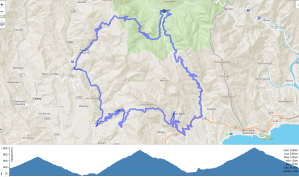 The Col de la Madone was made famous as one of Lance Armstrong’s favorite training rides, starting nearer to Menton. This loop starts in Sospel and does a clockwise loop that includes the Col de Castillon, the Col de la Madone, and the Col de Braus. Clockwise is better as the main road down from Sospel to Menton is quite busy and it’s better to ride it downhill so you get off it sooner. The whole loop is about 73.6 km (45.7 miles) with 1,956 meters (6,417′) of climbing.

Start on the D2204 where the bridge crosses the river in Sospel and head east briefly. Turn right following the signs for Menton then at the roundabout turn left following the D2566 for the Col de Castillon, which you reach in 7 km from the start of the ride. Go left through the tunnel and down to join the main road. Continue down this until you are almost at the A8 motorway on its high pillars, at about km 18.

Turn right following the signs for the D22A to Sainte-Agnès. It’s a little confusing initially as it appears you are about to get on the A8 motorway! Follow the rolling D22A as it rolls and weaves north and south of the A8 motorway, including one short steep section that briefly reaches 18%. Finally the D22 turns very sharp right and heads inland and up to Sainte-Agnès, which you reach at km 28. This climb gives you spectacular views of the village of Sainte-Agnès and the fort on top. Once at the big intersection on the edge of the village, turn very sharp left following the sign to Peille.

The next section, about 5 km up to the the Col de la Madone, is steeper than the section up to Sainte-Agnès, with plenty of 8-10%. After the col, descend down to the D53 where you turn right to Peille. A lovely bit of winding road through a few tunnels takes you into Peille, then a wonderful switchbacky descent takes you down to industrial town of La Grave in the valley below.

In La Grave, just before you cross the bridge, turn sharp right, doubling back on yourself, onto the D21 and follow this into l’Escarène. There’s a great restaurant on the church square where we had lunch. Continue up through l’Escarène where you’ll make two right hand turns, both signed to Sospel on the D2204.

As you make the 10 km ride up to the Col de Braus, for the first time in this area you’ll see kilometer signs shown with the average gradient for the next kilometer. The climb to the Col de Braus is fantastic with great views and several very tight and orderly switchbacks, which you can see well  from slightly above and past them.

From the Col de Braus, a wonderful fast descent with plenty of switchbacks leads you back into Sospel. 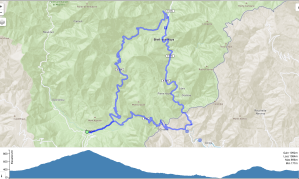 This is a fun and very varied little loop of 44 km (27.3 miles) with 925 meters (3,035′) of climbing. It crosses into Italy then back into France. The ride feels much longer than it actually is.

Start on the D2204 where the bridge crosses the river in Sospel. Head east on the D2204 and follow the road as it switchbacks up to reach the Col de Brouis after 12 km. A wonderful descent brings you down to the T-junction with the D6204 at the bottom of the valley. Turn right and follow the road downhill for about 11 km to where a road branches off to the right, signed to Olivetta and Sospel. Shortly before this junction you will enter Italy.

Climb up past Olivetta then back into France. This part of the ride has by far the steepest climbing on it, with a couple of sections reaching 12-13%. The road then rolls until you reach the Col de Brouis road. Turn left and ride back into Sospel.

There’s a great brochure that describes several cycling loops in the Maritime Alps. You can pick it up at the Tourist Office, or click here for the online version. Or here’s a PDF version that I downloaded.