The Gorges du Tarn is a beautiful part of France, with lovely little villages by the sides of the Tarn river. Tourism is big, and in the summer season you’ll see many people kayaking down the river. We stayed in Saint-Enimie, which is shown in the photo above.

This is a wonderful ride, leaving the valley bottom and climbing out of the gorge to the south, riding across the mostly flat plateau, then descending back down into the gorge. The traffic on the south side of the gorge is much lighter than on the north, and we saw very few cars.

The climb out of Sainte-Enimie, is a long gradual climb to the Col de Coperlac, 7.5 km and 426 meters of climbing, mainly with a 4-6% gradient. Much better and more fun is the climb out of La Malène, where you climb switchback after switchback for 4 km, gaining about 340 meters, mostly with an 8-11% gradient. Of course the switchbacks are also great fun to descend, which is why you should do the ride as an over-and-back 🙂

Starting in Sainte-Enimie: Leave the village over the bridge, following the D986 signed to Meyrueis, reaching the Col de Coperlac after 7.5 km. A gradual descent leads to the intersection with the D16 after 11 km. Turn right following  the sign for La Malène. Continue on the D16 until it splits at 13 km where you take the right-hand branch on the D43 to Malène. At 14 km the descent starts. It’s steep and switchbacky, with the switchbacks getting increasingly tight as you descend. A wonderful descent!

Starting in La Malène: Follow the D43 across the bridge then climb the beautiful switchbacks for 4 km and 340 meters of climbing. The gradient is relentless, mostly 8-11%. After another kilometer, bear left on the D16 and follow this until you reach the D986 in another two kilometers. Turn left and climb gradually to the Col de Coperlac, then a fast, smooth 7.5 km descent takes you down into Sainte-Enimie. 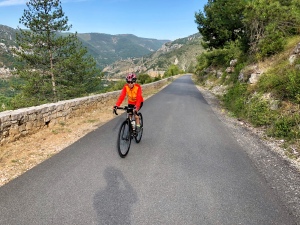 A lovely loop with a quiet and wonderful climb up the switchbacks above Montbrun. The climb feels remote as it goes up a smooth, narrow road, with very little traffic. The loop is about 47 km with 770 meters of climbing.

Start at the bridge in Sainte-Enimie and ride east along the main road. After about 7.5 km, turn right and head down to the strange looking village of Castelbouc (if you miss this turn, you can take the D68 to Montbrun in another 2 km).

From Castelbouc wander along the road below the cliffs for about 3 km to reach the D68 as it comes in from the left over the bridge. This is where the climb starts. A sign says that the route is difficult and dangerous but this is somewhat of an exaggeration!

The two kilometers up to Montbrun are a little rough, but above Montbrun the road becomes smoother and steeper. It’s a beautiful climb, mainly 7-10%, with some 11-12% thrown in nearer the top. After climbing for about 5.6 km and 350 meters of ascent, the gradient eases and in a bit over one kilometer you reach a T-junction.

Turn right following signs for Florac and Meyrueis, then in another two kilometers of rolling climbing you reach another T-junction where you again turn right, on the D16 following the sign for Meyrueis. It’s mainly flat for the next 15 km but there’s a long descent to the intersection with the D986. Turn right here and climb gradually to the Col de Coperlac then a fast 7.5 km descent takes you back to Sainte-Enimie.

(If you prefer, as you ride along the D16, you can take a road on the right signed to Mas-Saint-Chély. This will take you to the Col de Coperlac in a bit under 5 km, and avoids the long descent to the D986 and subsequent climb to the Col.)

This is the only climb in the area that is a designated climb, with markers every kilometer showing the gradient for the next kilometer. It leaves Saint-Enimie up the D986 on the north side of the gorge. This is the busier side and I enjoyed this climb less than the climbs on the south side of the gorge. The sign at the start says the climb is 9.1 km with 527 meters of ascent, an average gradient of 5.8% and a maximum gradient of 11.6%.

At about 1.75 km turn right following the signs for Mende. Around 3.75 km you can look down to the right and see the old road, which is a dirt road popular with hikers. Shortly after that you reach the Panorama de Ste Enimie, an overlook with a great view of the village.

Higher up there’s a kilometer-long section that my Garmin showed as 10% on the way up, and 9% on the way down. The official sign says it’s 9%.

The top is very obvious, and you turn round here if you are just doing the climb, which was what I did. The road continues and rolls across the beautiful high plateau. From the map it looks as though you could follow this then turn right on the D31 to Ispagnac then follow the road by the river back to Sainte-Enimie, which would give you a loop of about 45.6 km.