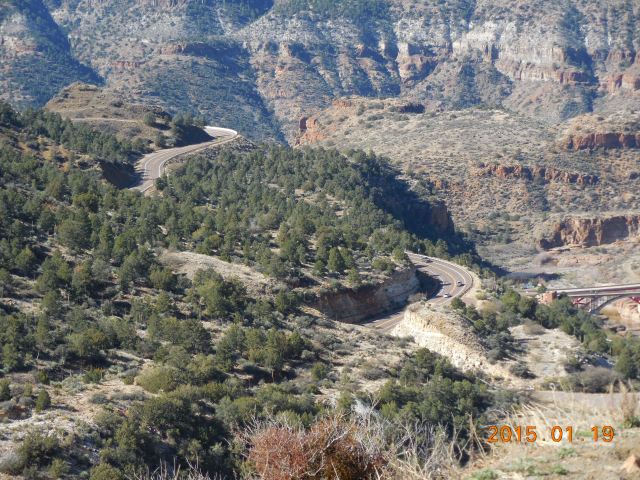 The Salt River Canyon Century is perhaps the best century ride in the Tucson area. It has lots of fantastic climbing, the highlight being climbing both ways out of the spectacular Salt River Canyon. We rode the Century on January 19, 2015.

GABA used to do a 2-day ride in early May from Globe to Show Low and back. The ride is about 85 miles each way. The Century ride does the first 53 miles, turning around at the high point before the long gradual climb into  Show Low (see below for more information about the GABA ride.)

The Salt River Canyon is approximately between miles 35 and 45

On the Century ride, there are no towns, convenience stores or gas stations to buy food or drink. (There is a rest area with bathrooms at the bottom of the canyon, but I didn’t notice anywhere to get water.) You will need to either carry all the food and drink you’ll need, stash food and water on the route, or find someone to support you. 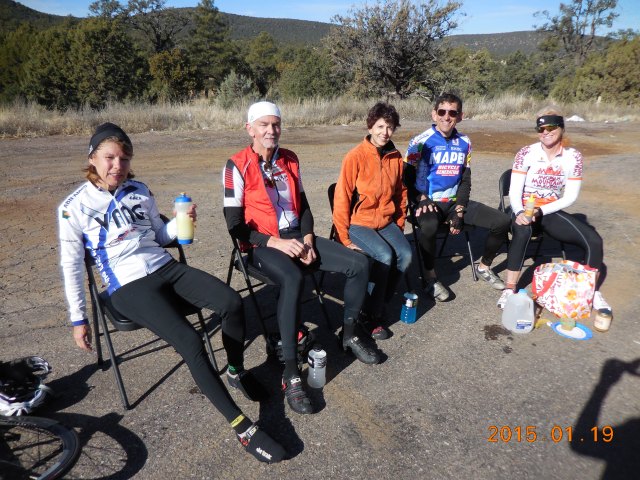 We did the latter, with Tanya providing wonderful support – both fuel, and a ride for people who got tired. 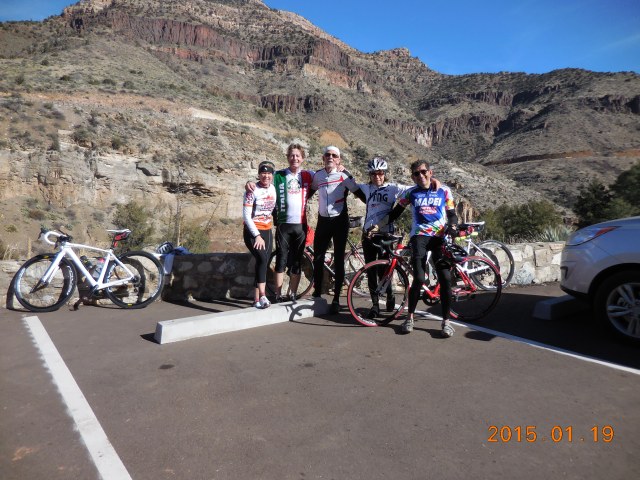 The rest stop at the bottom of the canyon, where people took off their cold weather tights, jackets, and arm warmers in preparation for the climb out of the canyon.

We stayed at the Motel 6 in Globe, and had breakfast at the McDonalds just across the street. Motel 6 is a very convenient location as the start of the ride is only a few hundred feet away.

Start a few hundred feet east of Motel 6 in Globe, where Highway 77 leaves the main road and heads northwards towards Show Low. Continue along Highway 77 for 53 miles. The turnaround is at an unmarked high point of the road, just before Mile Marker 308, where a sign shows a 2 mile downhill with a gradient of 6%.

The last 10 miles outbound are not particularly steep so if you want to do the best climbing and shorten the ride by about 20 miles, you can turn around a bit before mile marker 298 at a big pullout with a great view of the Salt River Canyon. This will reduce the length of the ride to about 85 miles. 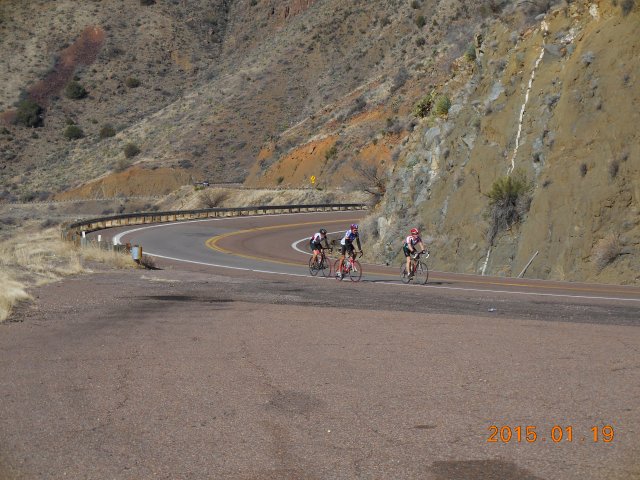 The outbound climb out of the Salt River Canyon

There are plenty of places to provide support. The GABA ride had the first rest area on the left at mile marker 279, at the top of the hill. A better place might be at mile 282, where the descent starts.

GABA did the next stop just after mile marker 298 but I thought the pullout a bit before 298 would have been better. There’s no obvious stopping place at the turnaround point at 53 miles.

On the way back, there’s an obvious stopping point after the climb out of the canyon, at the old Seneca Lake trading post between mile markers 287 and 288. From here there’s a lot more climbing, then a long descent before the final big climb. GABA had an aid station on the right between mile markers 265 and 266, near the base of the final big climb.

A friend and I rode from Globe to Show Low and back in a day on April 12, 2017, again wonderfully supported by Tanya. This ride was 170 miles with 15,450 feet of climbing. Our turn-around point in Show Low was Burger King where we also had lunch. There is now a gas station with food at mile 62.7 at the turnoff to White River.

Globe to Show Low profile. The Century turns round at the high point before the long gradual climb into Show Low.

Here’s a link to the GABA home page. While GABA traditionally put on a ride from Globe to Show Low and back in early May, it appears that they no longer do this ride.

The Motel 6 in Globe

A good restaurant to eat at in Globe is Irene’s Real Mexican Food, which coincidentally is near to Motel 6.